To view the television interview click on the link below:
​​http://www.meoneile.ie/ailt/dan-dowling-taispe%C3%A1ntas-camino-de-santiago#.WHOa1VOLTZ5

BELFAST artist Daniel Dowling never fails to surprise and entertain with his paintings and his current exhibition at Cultúrlann, Falls Road is no exception.

Firstly it's a visual diary of his 1,000km walk across Spain; secondly it was a journey through his life, coming to terms with the past and, he says, finding his identity at 62 years of age. It's an intriguing story that connects the 14 artworks depicting the landscapes and his discovery of links between Irish and Spanish cultures.

“Back in the mists of time, the Milesians, a people from northern Spain, invaded and occupied Ireland, bringing with them their Celtic culture and language.” And so began a mystic and fascinating story in watercolour, oil and pencil on paper.

Almost out of place is the large scale work showing shoppers walking along Donegall Square West, their bags overflowing, stern looks on their faces. “That's the baggage we all carry.”

On his journey Daniel took the path of the ancient Celts, following the ley lines to Finisterre – Spanish for 'the end of the world' – in the far north west of Galicia.

“They made these journeys to examine and explore their concept of reality. They walked to the very edge of what they thought was a flat Earth and peered over the edge into the abyss. Like them, as I walked I was able to look back on my life and examine the baggage.”

One painting depicts a ventriloquist doll's head, one quarter of the skull open, little people slaving away inside.

“My parents wallpapering my brain and so my outlook on life,” Daniel explains. “I now know I can wallpaper my own life thanks to that walk and the chance to steep myself in the history and culture of the country and the opportunity to put my experience on canvass.” 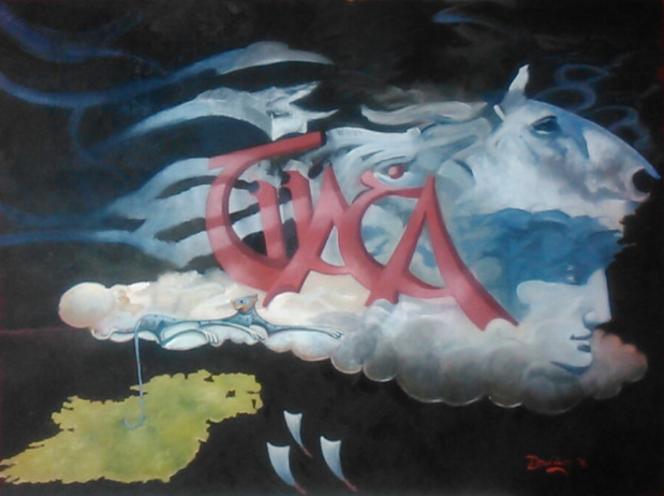 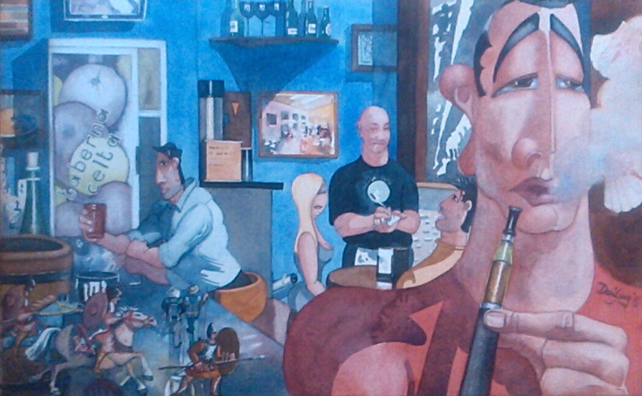 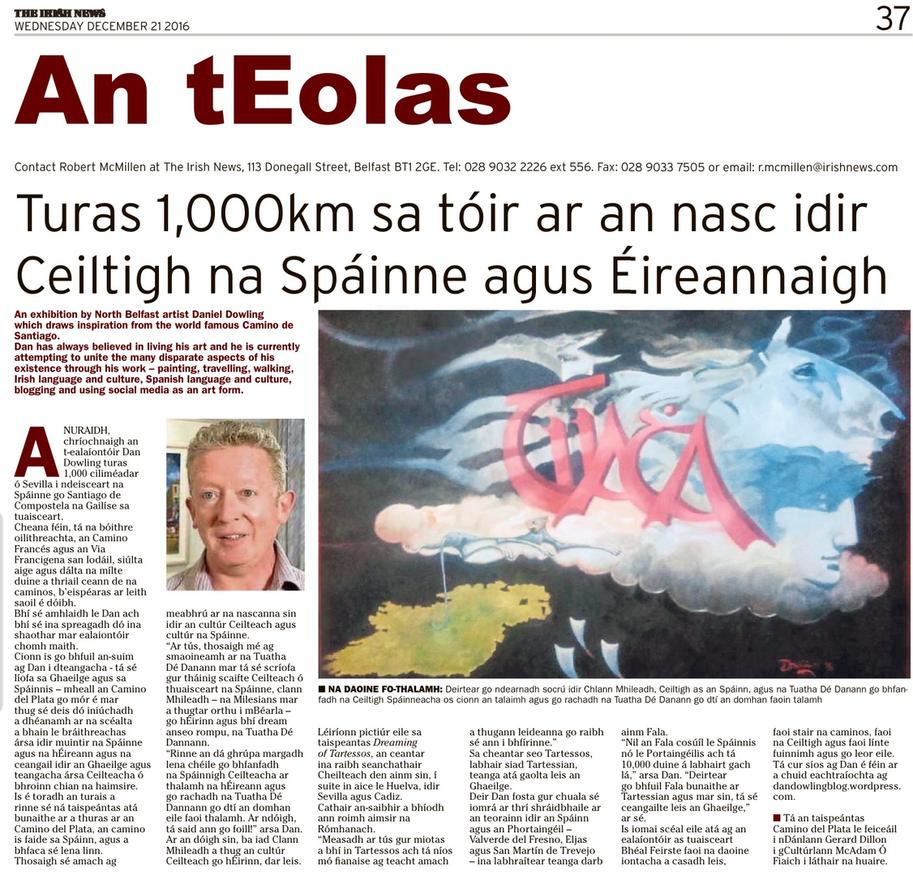 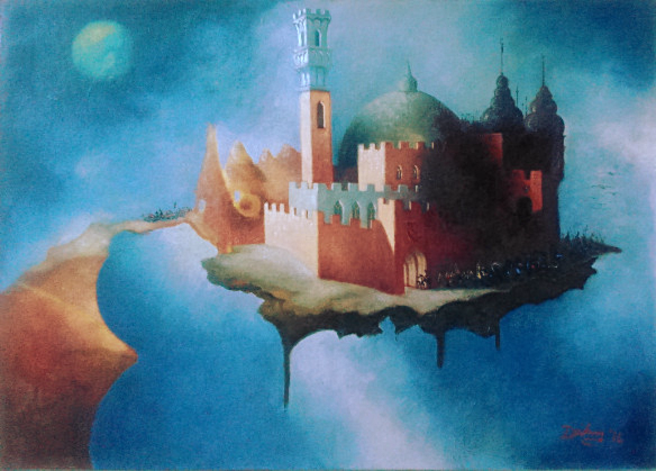 In Zamora, we came across Marcellino sitting on a bench along the main street, although I strongly suspect that he had been waiting there for us all of his life. He lived in a disused water tank, surrounded by books on ancient knowledge and magic, the celts, the history of the Caminos but most extraordinary of all the story of Waterloo teeth.     http://www.bbc.co.uk/news/magazine-33085031​ 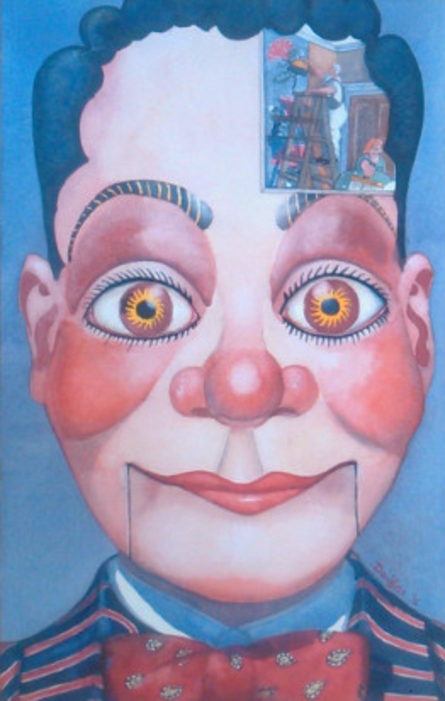 I met Manolo in Fuenterroble de Salvatierra, a tiny village of 290 people which in its strangeness and remoteness could have been dropped out of the sky onto the Meseta.  Manolo was a man whose life and reality were completely controlled by his ancestors.

Manolo and the Ancestors Pencil on Paper 73X53 cms 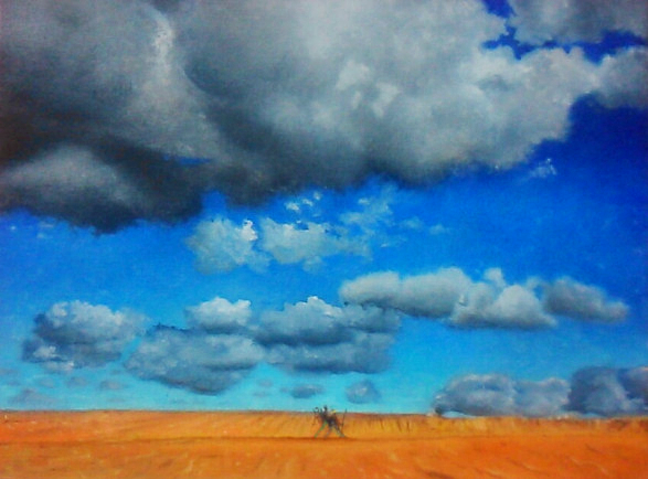 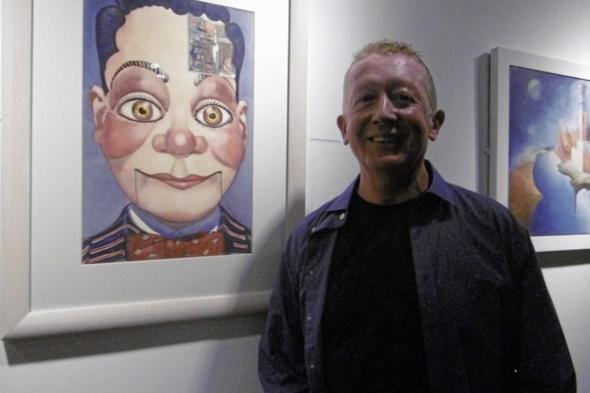 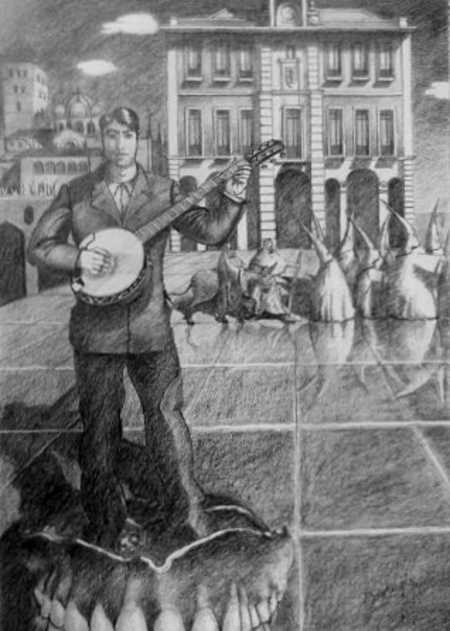 "Marcelino and the Waterloo Teeth" Pencil on Paper 73X53 cms 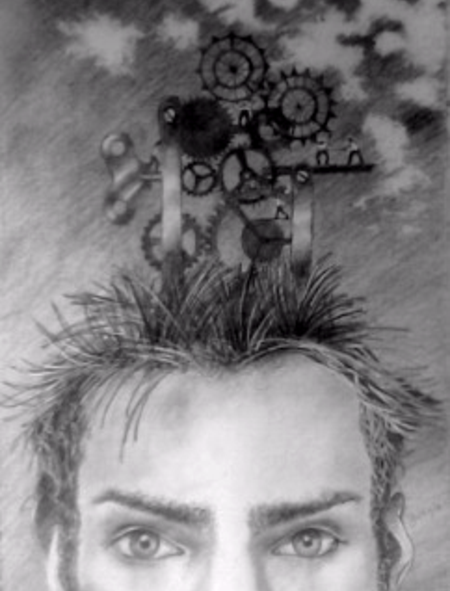 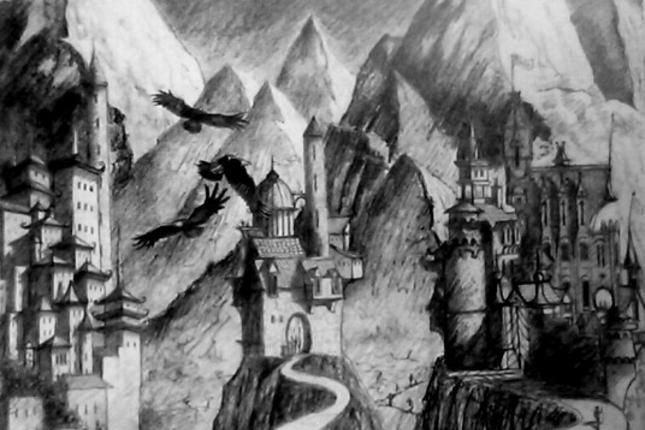 Naturally, having spent some time out there, where ever there may be, you tend to reflect on your own version of reality.  The image above shows a teenage me as a ventriloquist's doll with my parents busily wallpapering a version of what they want to be my reality, into my subconscious, as all good parents do.  At the point of writing, the exhibition continues in the Gerard Dillon Gallery, Cultúrlann, Falls Road, Belfast until 14 January 2017.

To view the television interview click on the link as follows:

The exhibition of paintings and drawings called "Via de Plata/Camino de Santiago" opened on 1 December 2016, in the Gerard Dillion Gallery, Cultúrlann McAdam Ó Fiaich, Falls Road, Belfast and continues until 14 January 2017.  The work was inspired by a 1000 kilometres walk from Seville in southern Spain to Santiago de Compostella in the north, completed this year.

The original idea was to make Celtic/Spanish cultural connections. Back in the mists of time, the Milesians or Gaels, a Celtic race from northern Spain, invaded and occupied Ireland, bringing with them their Celtic language and culture.  They displaced the incumbent Tuatha Dé Danann, a mystical and magical race of people who, amongst other cool tricks, travelled by dark cloud. Rather than confrontation, the Tuatha agreed to move into the otherworld, all that region below ground, where they remain to this very day and allowed the Milesians the world above.  This early connection was recorded by 11-century monks in the Book of Invasions (Leabhar Gabhlála) https://en.wikipedia.org/wiki/Milesians_%28Irish%29

I was then drawn to Tartessos, a fabulously rich pre-Roman Celtic city located between Seville and Cadiz, in southern Spain. Tartessos was once thought to be a myth, but not only has its veracity been established through contemporary archaeological techniques but also there is mounting evidence that a form of Gaeilge (Tartessian) was spoken. http://www.historyireland.com/pre-history-archaeology/tartessian-europes-newest-and-oldest-celtic-language/

During my investigations of Tartessos, I was made aware of three isolated villages located in the high mountains on the Spanish/Portuguese frontier, San Martin de Trevejo, Eljas, and  Valverde del Fresno where the local linguistic variation is Fala, a language different from both Spanish and Portuguese, spoken by some ten thoudand people and thought to be related to ancient Tartessian/Gaeilge.
https://en.wikipedia.org/wiki/Fala_language

When we reached Salamanca, we visited the Taberna Celta and met the owner Caesar whose hospitality and generosity is legendary.  Apart from the glorious food and wine, he entertained us with stories of the history of the Caminos.  He told us that the ancient Celts starting walking the Caminos in pre-Roman Iberia.  They followed ley lines, lines of energy, not to Santiago de Compostela, but to Finisterre, Spanish for the end of the world.

They made these journeys, not out of necessity, but to examine and explore their concept of reality.  They walked to the very edge of what they thought was a flat earth and peered over the edge into the abyss.  They watched their sun-god disappear into oblivion, in the west, every evening and then reappear, in the east, next morning, an exceptional reality trip.

We left Salamanca not only with our heads brimming with ideas of reality but we also set off on the most exciting, the most enjoyable, the most difficult, the most otherworldly part of the journey,  the immense Spanish Meseta.  The Spanish Meseta covers 210,000 square kilometres and has an average elevation of 660 metres. In other words, it is vast, it is incomprehensible, it is another world and it could not have been more appropriate to our state of mind.  After a few days walking under those enormous skies, you realise that reality has become a mere concept and, no longer, are there any hard and fast rules.  You can walk to the very limit of your existence and, like the ancient Celts, peer over the edge into the abyss and see if anything or anyone peers back.  As always, when you set yourself on such a course, the universe conspires to make it happen.  We met some extraordinary people.