cover image above).  However, in common with many artists, Dowling has reached a point in life and career where colour, form and texture are not only an equally valid but a much more honest and fundamental way of expressing himself.

Most people find abstraction difficult.  Our brains are constantly in search of an image, something we recognize, something we feel comfortable with and on which we can hang our ideas.  Wassily Kandinsky (an artistic hero of Dowling's) compared colour to musical notation.  In other words, an abstract work should spark that instant rapport which we experience with certain pieces of music, an experience which requires no explanation.  The titles in Irish in Dowling's work are not intended to be descriptive or a guide to the viewer.  However, they do reflect his lifelong interest in the Irish language and culture, among many other things. 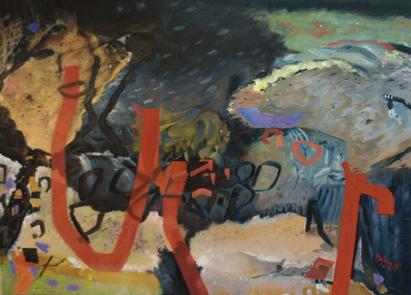 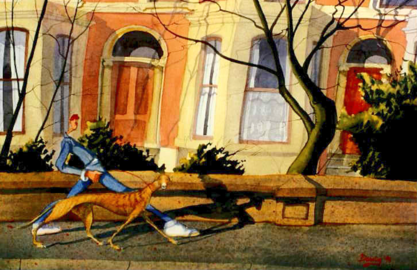 Tartessos to Galicia and hence Ireland.

(http://www.historyireland.com/pre-history-archaeology/tartessian-europes-newest-and-oldest-celtic-language/). There are substantial celtic remains in Portugal and connections with Galicia which well-detailed in many sources but especially the  "Leabhar Gabhála na hÉireann" (the Book of Invasions) https://en.wikipedia.org/wiki/Lebor_Gab%C3%A1la_%C3%89renn

This will be a real physical journey, but also a journey of the mind.  Dan will write a daily blog on his Facebook page

and Twitter, with images of what he finds.  The walk, the blog, the life experience will be a complete project.  Later, this will serve as a source of inspiration for a series of paintings and drawings to be exhibited in the Gerard Dillon Gallery, Cultúrlann McAdam Ó Fiaich, Belfast in November 2016.

Dowling was able to express himself in a very personal way and find a serious inner direction.  Gradually, the trauma of childhood unravelled and an enigmatic style developed.  Lonely figures appeared, strolling across the picture plane, or monstrous mothers pushing tiny prams down empty suburban streets.

Since the age of twenty, Dan Dowling worked for a local bank.  However, in 1999, he had the opportunity to leave the bank and work as a full-time artist.  At this time, Dan was awarded a bursary by the Arts Council of Northern Ireland, to travel in Spain while simultaneously creating images of his experiences.  He lived and worked in Barcelona for four months.  A life-long love affair with Spain and all things Spanish followed.

Barcelona presented Dowling with his first genuine opportunity to spend a period of time as the outsider, the foreigner, the camera, observing life and reacting to it through his art.  At first, the daily routine consisted of a lonely, feverish round of painting and drawing.  However, in time, he became friends with Maribel, the owner of "Padam,Padam", a small bar near the Plaza Real with an even smaller art gallery.

It was a tiny space.  In spite of this, Maribel performed miracles and maintained a regular series of exhibitions (paintings, drawings, photographs, sculpture and happenings).  Shortly before his return to Belfast, Dan was invited to show his 'work in progress'  in Maribel's gallery.  The complete exhibition of watercolours and oils, entitled "Barcelona, City of Dreams", was exhibited the following year in the Cavehill Gallery, Belfast. 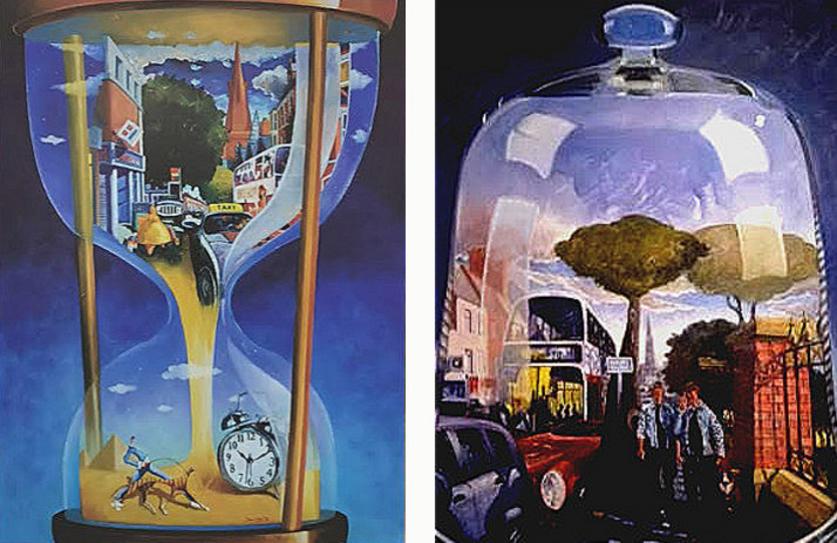 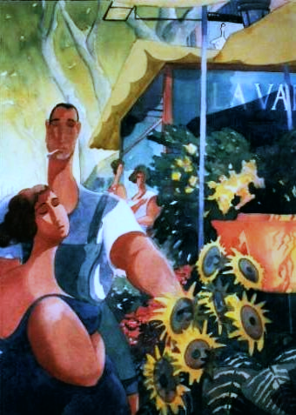 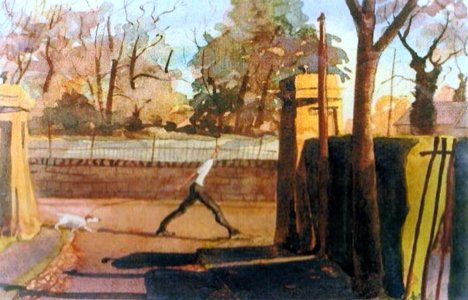 After the initial stay in Barcelona, several more journeys to Spain followed - Barcelona again, Seville and Madrid.  Later, Dan would travel to Italy and walk the Via Francigena, from Turin to Rome.  Each journey produced an exhibition. 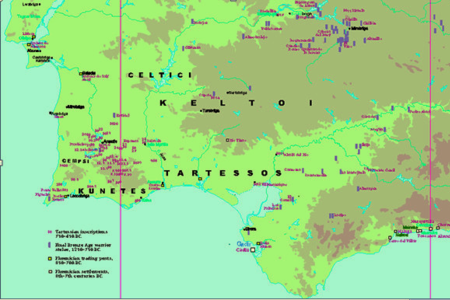 In December 2015 and early 2016, Dan Dowling will walk the Via de Plata and the Portuguese Camino.  The sojourn will begin in Seville in southern Spain and end in Santiago de Compostela in Galicia in northern Spain, a distance of 1000 kilometres. He has walked the Camino Francés across northern Spain several times and the Via Francigena in Italy.  They are all ancient pilgrimage routes and, for Dan, serve both as a life experience and a source of inspiration for his work.  He is particularly attracted to this route, as evidence exists of a possible parallel  journey of the Irish language through the Iberian peninsula from the mythical


Dan Dowling was born and educated in Belfast, Northern Ireland.  He is self-taught and has always considered art, painting and drawing to be an essential form of self-expression and a way of communicating with the rest of the world.

In 1977, he had his first one-person exhibition in the Ulster Arts Club Gallery, Elmwood Avenue, Belfast.  Later, he helped to organize exhibitions in the club, attended life-drawing classes and enjoyed plein air landscape painting with his fellow members.  However, for Dan, there was something missing.  He needed to live his art.  He began to create images of his everyday life as a catharsis of sorts and a search for identity.  And so, Dan Dowling's journey of self-discovery began.  By creating images of his own life

2009 "On the Road to San Gimignano" Cavehill Gallery, Belfast.

Dan Dowling has always drawn upon his own life experience as a source of inspiration.  Figurative work based on his native Belfast continues to be important.  In 2015, Belfast is a rapidly-changing city.  Dan's recent figurative work has taken on a much more contemporary flavour to reflect these changes (eg "The Big Issue", the